Author Jon Rance is guest posting today on the creative process of his writing. His book, This Thirtysomething Life, published by Hodder and Stoughton, is a love story about what happens after we’ve fallen in love, when we’ve swapped frolicking in the bed for cigarettes in the shed and Match of the Day for Mothercare. Brutally honest, laugh-out-loud funny and heart-warming, this is a diary about one man’s bumbling journey on the road to adulthood. If you like Nick Hornby, you’ll enjoy this. Thank you, John. 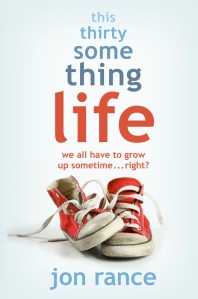 Firstly, a big Thank You to Fiona for letting me loose on her blog. She’s a brave lady indeed! For those of you who don’t know me, I’m Jon Rance, author of the romantic comedy novel, This Thirtysomething Life. I approached Fiona and asked her if I guest blog on her site. Luckily she agreed and so here I am.

Being a writer, people often ask me the same sort of questions. Where do you get your ideas? How do you write? Where do the characters come from?  I guess what they want to know is what my creative process is. It’s an interesting concept and I’m sure different for every author. Mine is a bit haphazard if I’m honest. I read about authors who meticulously plan out books down to the last full-stop. I don’t.

When I start a novel I need the following things. A title. Main characters. Motivation. An ending. I think having a title from the off helps bring the whole thing together. I often think of the title before I know anything about the book. I need to know who the main characters are. By this I just mean a brief bio, name and what they look like. Motivation is what will drive the book forwards. In This Thirtysomething Life, I knew from the beginning that the story was going to be about a guy having a hard time growing up and coming to terms with becoming a father. Right from the word go everything else stemmed from this idea. An ending. Endings can change during the book, it happens, but I think it’s important to know at the beginning where the story is going. The journey is something else, but a destination is important, whether it’s a scene you have in mind, a sentence or just where the character is emotionally.

Once I have those I just start writing. For me writing is a very organic process. I need a few chapters to really get to know the characters properly. I often find that once I know them better, the plot is formed mostly in part by them and the choices they make. My writing has always been character based. I think in my genre of commercial fiction, characters are the base of everything. Plot is important, but for me the first draft is where I get to know the characters. Once I have the first draft down, the second, third, fourth – fifteenth are mainly about tweaking the structure and the plot. I often think writing a novel is like building a house. The first draft is building the structure. Every other draft after that is about making it look nice. The last draft is the one where you get to hang up the paintings, pop the interesting sculpture you bought from the market on the mantelpiece and then sit down on the comfy sofa and marvel at what you’ve accomplished.

I’ve definitely improved as a writer with every book. I wrote four complete novels before This Thirtysomething Life was picked up and published by Hodder. Those four novels were my learning curve. I made some mistakes, but more importantly, I learnt about my creative process. I think it’s a very personal thing. We can learn from others, read books about writing, get hints and tips, but at the end of the day, we all have to learn our own creative process. I used to think mine was ridiculous and that I should change and be more organised, but what I’ve come to realise is that it doesn’t matter how you write, as long as you do it your way because writing is about being creative, it isn’t painting my numbers and checking boxes. Think of the creative process as your friend rather than your enemy. It’s taken me a long time, but I love mine now because it is all mine and I couldn’t do it any other way.

Jon Rance is the author of the romantic comedy novel, THIS THIRTYSOMETHING LIFE, which was a Top Ten best-selling book on the Amazon chart. Born in Southampton in 1975, he studied English Literature at Middlesex University, London, before going travelling and meeting his American wife in Australia. He is currently working on his second novel, HAPPY ENDINGS. Outside of writing Jon loves travelling, music, sit-coms, art and watching football (but not playing anymore due to dodgy knees).

Both THIS THIRTYSOMETHING LIFE and HAPPY ENDINGS are published by Hodder and Stoughton. Jon is represented by Ariella Feiner at United Agents.

Are you hooked on Homeland? Yes? Great, we’re on the same wavelength. No? Give it a go, I’m sure you’ll be waiting for the next episode as soon as you have watched just one. Try it and let me know what you think. There is a trailer at the end of the post. I love espionage and secret service dramas. I was hooked on Spooks, set in the UK and now Homeland, a US  TV series which was released in October 2011. I watched the latest episode last night and my final thoughts before I drifted off to sleep, and my first waking thoughts, were what makes it so gripping?

There are many good dramas, films, and books that will keep you wanting more – books that will keep you up all night, films that leave you glued to your seat long after the cinema has emptied, drama series that will leave you waiting for the next episode, but how and why does this happen? Like all of you, my life is full and busy, there isn’t much time to watch TV, get to the cinema often or read a book right through in one sitting. So it has to take a pretty good plot and compelling characters to make me want more. These are the two key elements of a good storyline. You can have a great plot with two-dimensional characters and the reader/viewer won’t engage or feel anything, apart from maybe the need to go and make a coffee. Similarly, you might have engaging characters but if nothing happens to them, then there is no tension or suspense, nothing to stay for, nothing to come back for.

I’ll fill you in quickly on the Homeland plot:

Homeland is an edge-of-your-seat thriller, following Marine Sergeant Nicholas Brody (Damian Lewis), an American soldier returned to the US from years of captivity in Iraq, and Carrie Mathison (Claire Danes), a Central Intelligence Agency operations officer who conducted an unauthorised operation in Iraq and is put on probation. She is warned that an American prisoner of war has been turned by al-Qaeda. She believes Brody is not an American Hero, but part of a sleeper cell planning a terrorist attack. The only person she can trust is Saul Berenson. The two must now work together to investigate Brody and prevent another terrorist attack on America. Homeland was named Best Drama Series at the Emmy Awards, with stars Claire Danes and Damian Lewis winning Lead Actress in a Drama Series, and Lead Actor in a Drama Series, respectively.  The series also won Outstanding Writing for a Drama Series and Outstanding Casting for a Drama Series.

So, what is it that has made the series so successful, and why am I taking up your time in sharing all of this? Because it is important to learn what makes  the viewer keep coming back, and what keeps people reading.

A story has to have some element of conflict – conflict of desires, conflict of interest, conflict between characters. Without it there is very little tension. Not all books are thriller/espionage/action adventure, but even in a romance or historical fiction novel you’ll find some good areas of conflict which propel the plot forwards and drive the action. In Homeland you never really know which side Nicholas Brody is on. There are moments when you believe he wants the best for the US government and the country, and times when he wants to support the terrorist group who he became entwined with during his years in prison. He has allegiances to both sides for various reasons. As the viewer, you never know what he really believes.

Sol Stein, author of nine novels, poet, screenplay and TV drama script writer, and creative writing lecturer, has said this of characterisation – ‘When I used to teach creative writing, I would tell the students to make their characters want something right away even if it’s only a glass of water. Characters paralyzed by the meaninglessness of modern life still have to drink water from time to time.’ He says that we are driven through life by needs and wants, that these desires are the driving force of characters. If a character does not want something enough, the reader or viewer will have a difficult time getting behind them, and will lack the emotional experience that they are looking for. Carrie, in Homeland, is constantly trying to prove her belief that Brody has been turned and is a ‘threat to national security.’ It is this drive in her, despite the obstacles, that keeps you hooked. You want her to succeed. 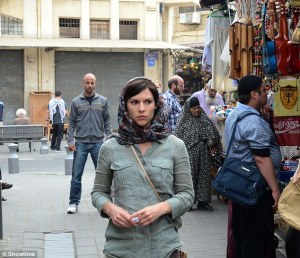 What have you seen, read or written recently that builds tension? Do you have any examples of good plot or compelling characters?

I’m off to see Skyfall on Wednesday! Enjoy the Homeland trailer…