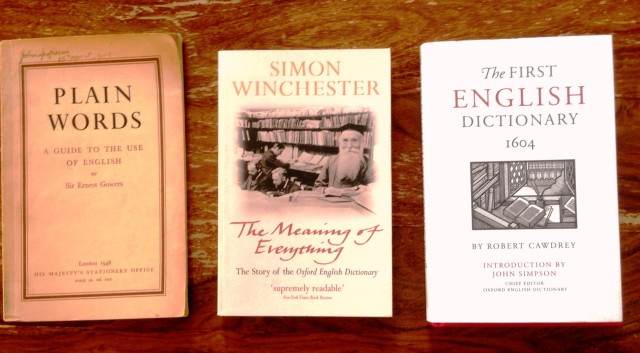 My Father arrived on a flight from the UK last week armed with a selection of books which were being sold from a library. Among them were The First English Dictionary 1604 by Robert Cawdrey, Plain Words: A Guide to the Use of English by Ernest Gowers (1948), and The Meaning of Everything: The Story of the Oxford English Dictionary by Simon Winchester. For those of you who appreciate the smell of old books, they oozed the vanilla scent that is produced by aging paper as the lignin breaks down. You can read about the Science of it here . The content was of particular interest to me as a writer. I love words: their origins, use and translations and I used to collect dictionaries and the odd thesaurus, along with books of literary quotes.

Amongst the books my Father brought with him were a few on different parts of the world and a History of England which was originally presented to the Archbishop of Canterbury, Michael Ramsey, in 1974. The inscription made the book all the more unique in the age of eBooks and I was reminded of the wonder of old books. We used to have a second hand bookshop at the end of our road when I was a child with the most unusual books and the same wonderful musty vanilla smell invading your senses as you opened the door. I love eBooks for the ease and speed of getting into a new book, especially as I live in a country where English is not the primary language and where the English books take up a small shelf space in the upper corners of a few bookshops. But I will never tire of the scent of old paper, of interesting inscriptions placed in the front of second hand books, of the notes scribbled in the margins and of wondering who the owner might have been, or whether there is a whole story behind a string of owners. Neither will I tire of the physical turning of the pages and the feeling of holding a book in my hands as I curl up with a coffee and a few hours of peace.