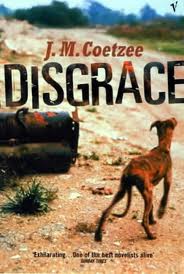 There are books which stay with you for months and years beyond the final page; there are books which draw you in to the point where you cease to feel time; there are books which transport you to a different time and place, yet keep you rooted fully here in the present. This book achieves all of these with a masterful use of imagery and language. This is one of the most powerful books I have read, partly because of its timeless themes and wholly for its ability to get inside the mind of its main character and his daughter, and of course for the delicate insight into human nature, with its brutality and desires. I was utterly captivated.

Set in post-apartheid South Africa, J. M. Coetzee’s searing novel tells the story of David Lurie, a twice divorced, 52-year-old professor of communications and Romantic Poetry at Cape Technical University. He has an impulsive affair with one of his students, Melanie Isaacs. The affair sours and he is denounced and summoned before a committee of inquiry. Willing to admit his guilt, but refusing to yield to pressure to repent publicly, he resigns and retreats to his daughter Lucy’s isolated smallholding. For a time, his daughter’s influence and the natural rhythms of the farm promise to harmonise his discordant life. But the balance of power in the country is shifting. He and Lucy become victims of a savage and disturbing attack which brings into relief all the difficulties in their relationship.

Among many accolades for the book are the Man Booker Prize (1999),

Coetzee delves into the darkness of the human condition, making this an uncomfortable but compelling read. His descriptions are often harsh and gritty, but somehow satisfying: ‘The skull, followed by the temperament: the two hardest parts of the body.’ His insight into the mind is beautifully reflected in sentences such as this: ‘His own opinion, which he does not air, is that the origin of speech like in song, and the origins of song in the need to fill out with sound the overlarge and rather empty human soul.’

I will hold on to my battered copy, treasure it, reread it, and enjoy the fact that I have finally managed to read it, although late in the game. Have you read it? What did you think? I’d like to hear your thoughts.

4 thoughts on “Disgrace by J M Coetzee: A Review”