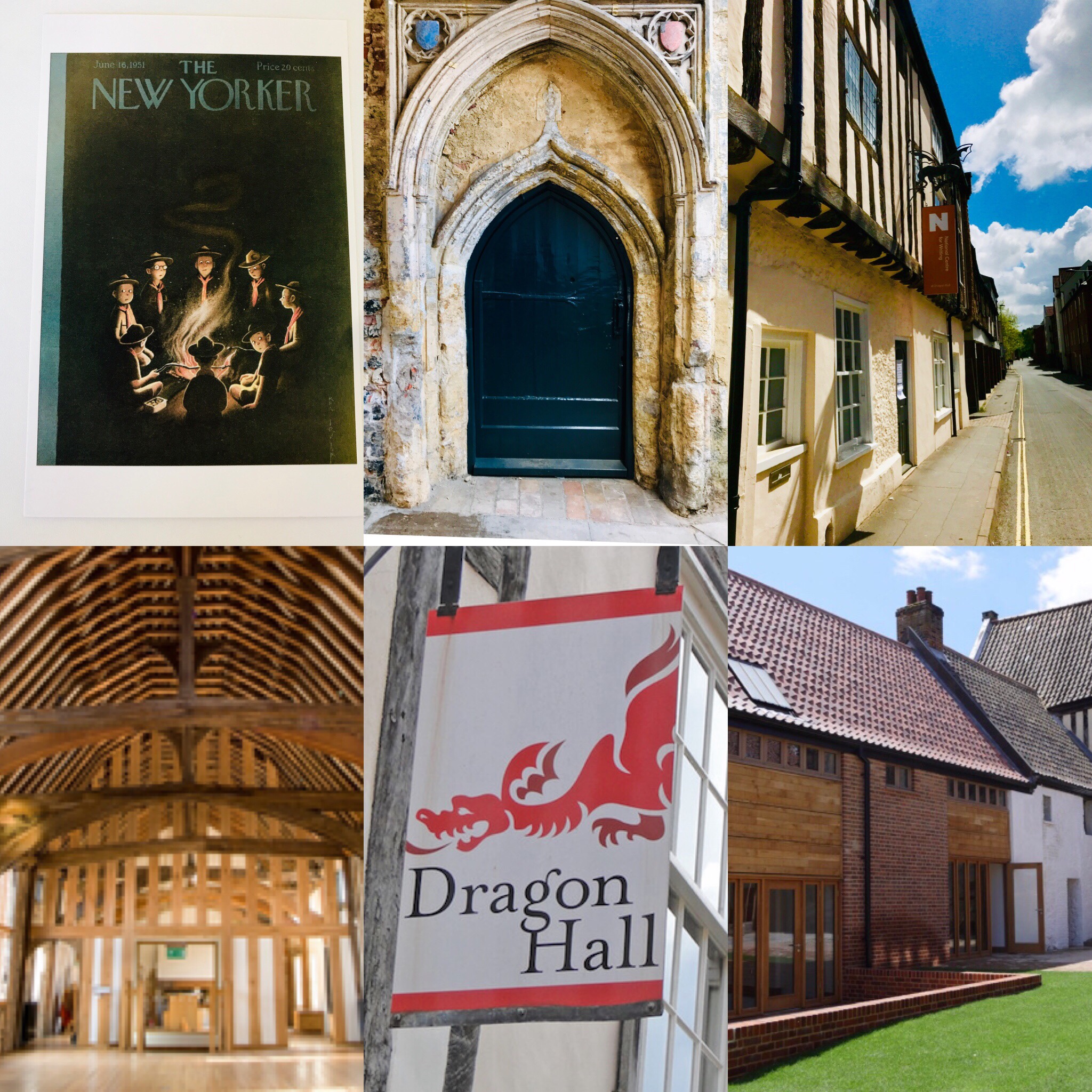 On Saturday I had the pleasure of attending the Flash Fiction Workshop, run by the good folk of Smokelong Quarterly, Christopher Allen and Helen Rye, at the National Centre for Writing in Norwich. It was a beautiful setting and a great opportunity to hone our skills. I sat alongside sixteen others – some writers, some editors, all wanting to learn about the craft.

I wanted to share some of my experiences with you. It was the first writing course I have been on, despite having had work published for nearly seven years. Armed with a notepad and pen, the lack of a computer felt freeing. My left-handed writing is quite shoddy but there was a freedom in being able to scrawl across the page and to underline and cross out or circle parts of the text.

We were given various exercises which took me out of my comfort zone. There were also lots of writing prompts, which I admitted to disliking. One of the prompts was a front cover image from a 1951 edition of the New Yorker. We discussed it in pairs and I very much enjoyed the group work. Bouncing ideas off another writer was invaluable and has led me to the idea of finding a writing buddy. Writing can be quite solitary and the very nature of having lots of writers together fuelled me.

Christopher asked us to think about narrative and dialogue, tense, point of view and our use of language.

For me, some of the most useful questions and ideas I am left with as I type up the notes, are – finding the core or the emotion of the story, using memory, and brutal editing, but more than that, finding a fluid approach to the text and being flexible in your approach. Finding what works and what doesn’t.

I was reminded that flash shares nothing in common with the short story form or the novel and is all about a moment. I have done various photography jobs over the years and I like taking photographs for the same reason that I like writing flash. It’s about finding a moment in time and sharing in it a way that evokes emotion in the reader. It’s about observation and the fine details of life. It’s about thoughts and feelings that stop us in our tracks. It’s about relaying and recreating the gut wrenching moments in time that evoke a sensation, a reaction, an emotion.

It was, quite simply, brilliant. If you have a chance to go on a writing course, go. It can’t recommend it highly enough. I would like to thank Rupert Dastur from TSS Publishing for sponsoring me to go on this course. I am hugely grateful.

Now to expand on some of the pieces I began and start to submit my work.