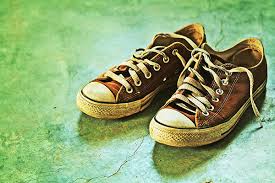 I have a pair of shoes that are so comfortable I hardly feel I’m wearing them. But they are falling apart, to the point that they really need to be thrown out. This morning a new pair arrived at the door. I ordered online to save time shopping, and to spend more time this week writing. I opened the box, unwrapped all the paper, et voilà – a new pair of shoes. They were different, except for the fact that they were actually the same! Yes, I ordered the same pair. So the first pair presumably once looked much like the second, although I can’t remember them ever looking that fresh and zippy!

I tried on the new pair, shuffled, took them off and tentatively put my feet back into the old pair. But something stopped me: a voice inside my head that said, ‘You’ve just ordered a new pair. Why are you going back to the old ones? They need to go in the bin.’ Hmm. I took them off and tucked them away. They have yet to reach the bin. As I type, I’m wriggling my toes inside the new ones. When I look down they look great, but they are not as comfortable. ‘It’s OK,’ I tell myself. ‘You’ll just take time to get used to them. Keep them on.’

Isn’t that what’s it’s like with writing that doesn’t work? Some of it is scruffy but comfortable. You cling on to it in the vain hope that it might work, but you know deep in the pit of your coffee-and-biscuit-filled stomach that it won’t. You know the reality is that you will need to cut, ruthlessly, until your work is, in places, almost unrecognisable. You will need to throw away the holey parts, the frayed edges, the parts with missing pieces that will never be filled.

It’s amazing how much emotion or sentiment is attached to some pieces of work, which is why you need good beta readers and good editors and an open mind. As you write, and as you reread, you have to develop the ability to see your story through the eyes of someone with no emotional investment in your work, someone who is prepared to throw out the parts that you want to keep. It is possibly one of the toughest parts of the process. Sometimes whole stories need to be thrown out, sometimes its beginnings or endings and sometimes it might just be sections.

What can you throw away that isn’t working? What can you cut to make your writing tighter?

I don’t know about you but I find book editing so much more difficult than the actual writing process. It feels as though you are dissecting the life out of your creativity and destroying your story. If you are a good writer, it doesn’t necessarily mean that you will also make a good editor, entrepreneur or (add any other hat).

If you self-publish then the amount of head-spinning changes that you will have to make throughout the writing, editing, publishing and marketing process are phenomenal and at each stage you are wearing a different hat. It is a cycle that many writers resist until they can get to the stage of writing again and beginning the next book.

At the editing stage there is one issue that has played on my mind recently, the overuse of words. After having put my book through beta readers, two professional edits and many, many of my own edits – I’ve lost count – there are still issues popping up, mainly the overuse of words. I obviously have a penchant for certain words, which I’ve used on multiple occasions, we all do. For example, I found ‘somehow’ more than ten times. What purpose does the word serve? Not much, exactly! So I either slashed or replaced it. You can use the ‘find’ function on word, as it speeds up the process, but don’t automatically replace one word with another. Think about the flow of the sentence, the context and the grammar.

Have a look at these words, all on the top of the lists of overused words:

What do they tell you? Not a lot. The point is that every word needs to drive the plot forward or give the reader a better understanding of a character, which in turn drives the plot forward. Many writers use ineffective words as padding and it derails the pace. If you want to keep the pace going you need to keep your writing tight.

If I wrote ‘The scene of the crime was literally a swarm of reporters, all really hoping for a snap’ would you keep reading? Would you still be awake?

How about ‘The body lay inside a ringed fence, flash-bulbs lit up the scene.’  Better? These are basic but give you the idea. I would also advise against using words like ‘little’. I found that I’d used the word ‘perched’ twice  for a character who would never ‘perch’. It’s not even an appealing word. What about ‘very’ and ‘get’? It’s easy for these words to go unnoticed but it is important to make each word count.

Which words do you use too frequently?