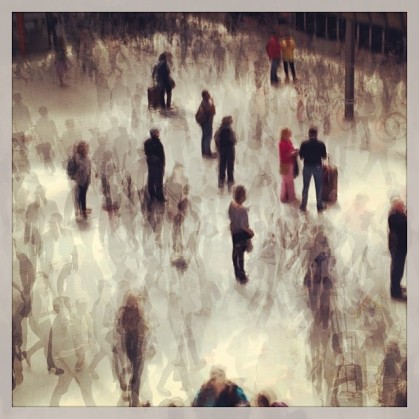 One of my short stories, A Question in a Gallery, has just been published in Issue 5 of Spontaneity Magazine. It was written in response to this image of Waterloo Concourse by photographer Mark Charlton, also published in Spontaneity. Spontaneity is a new arts journal which seeks to link prose to visual art, poetry and music, and is one of the most original journals I have read in recent years. Dip into their pages and see what you find. It’s truly inspirational.

A Question in a Gallery

I push through the doors, the signs for St Paul’s Station lining the walls as though I might miss my stop. I have managed to avoid the rush hour, having taken the day off work. The air is thick with anticipation, or maybe it’s fear. I don’t know.

I weave through the tiled corridors and find the bottom of the escalators. There are more signs – the St Paul’s wording replaced with To Street, like an instruction on a board game. Posters pull me into a world of colour and cabaret. A woman holds the hands of two small children, as they pass me travelling in the opposite direction. They fight over who will hold the moving handrail. Her face remains unchanged, as though they do not exist…