Just as I had posted the previous publication news, I discovered that another of my short stories has just been published online. North Norfolk Coast has been published at 1000 Words: 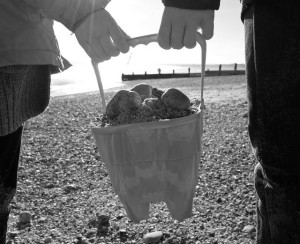 Days were spent with her brother, Donald, on the beaches of the North Norfolk coast, with its wild winds and salt air. They built sand castles before the sun set; before the waves swept over the turrets, dragging them back into the sea. She could hear her father’s voice.

‘You’ll catch your death if you don’t put a sweater on, girl. It’s getting cold.’

He spoke as though he was still fighting from the trenches. She wondered how death could be caught, if at all. The swell of the waves grew with each crash, pounding the shore and devouring the castles with their flags. The moats, engulfed with water at high tide, turned her thoughts to the river, which had burst its banks in an early January. The thought frightened her, perhaps more than her father’s unkind words.