Some of you may have noticed the blog header change. It is a photograph I took of  W. H. Auden’s desk and typewriter at his summer house in Kirchstetten, Austria, not so far from where I live. The previous header was an image of his bookshelves which are upstairs in his study. I visited Auden’s summer house last Autumn, just as Take Me to the Castle was about to be released and just as I began to creep into the world of social media as a writer. If you searched for F. C. Malby prior to September 2012, you would not have found a thing. 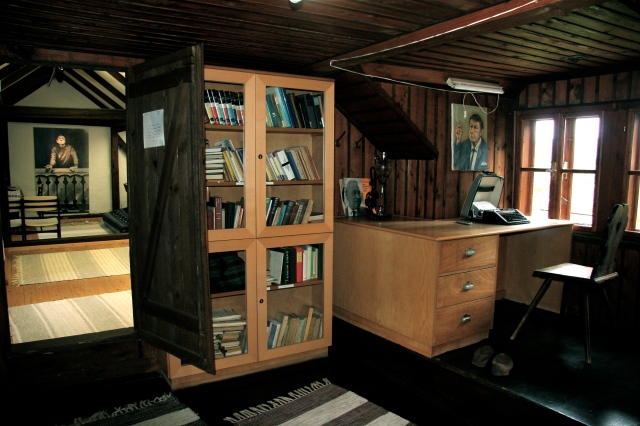 I have been interested in writing spaces for a while for several reasons:

They form the inspiration for the work of each writer, whether the space is a small desk in the corner of a room, a pocket of a cafe, a library, or a large wood desk in a grander room. Writers are natural sponges of their immediate surroundings – the views, the conversations, small objects or buildings. All of these things help to form the ideas which swirl around in our minds.

They are a slice of history. Visiting this beautiful house in a remote village, where Auden penned gems such as Stop all the Clocks, I felt a sense of anticipation as I scanned his bookshelves, coffee pots, vodka bottles, memorabilia, even his slippers left by the chair. It was almost as though he could have walked into the room at any moment. Everything he read and used has been left as it was and turned into a small museum. I sat in the chair by the desk and looked out of the window wondering what he might have thought as he looked out towards the woods.

The books say much about the author. Auden had a small selection of his own books in amongst shelves of writers such as Wodehouse, Shakespeare, Twain, Waugh, Keats and Golding, as well as a collection of atlases and books on psychology and philosophy. I looked at the books closely because I believe that what each writer reads will influence his or her writing and style to a great extent.

I have been to the Isle of Jura on the West coast of Scotland but have yet to visit the rented house where Orwell penned Nineteen Eighty Four.  He apparently worked without electricity or running water on a remote end of the isle.

If you are interested in finding out more about writers and their creative spaces, I have a board on Pinterest of well known writers, with many in their work environment. 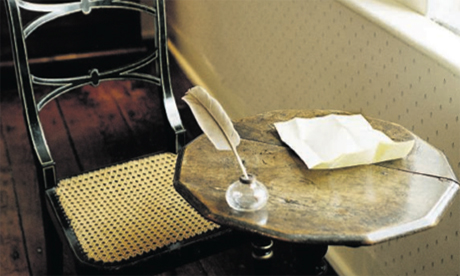 Agatha Christie surrounded herself with art. I also find art galleries a source of inspiration for some of my writing.

Beatrix Potter surrounded herself with animals as she wrote and illustrated her famous Peter Rabbit books.

E. B. White worked in a boathouse. Imagine the waves lapping against the boathouse walls as he wrote and a view into a horizon where the ocean meets the sky.

Louise de Bernieres writes in a shed in the garden over looking a vegetable patch with a view of pheasants, listening to music.

Sebastian Faulks uses a small room fifteen minutes from his house. He has a small cameo of Tolstoy that he bought in his house in Moscow and a bronze relief of Dickens. For each book he invokes a sort of patron saint. For A Week in December it was George Orwell.

Jane Austin worked on a fragile 12-sided piece of walnut on a single tripod, which must be the smallest table ever used by a writer. She established herself as a writer whilst working here after a long period of silence. Her early novels had been written upstairs in her father’s Hampshire rectory.

F. Scott Fitzgerald on the Secret of Great Writing

“Nothing any good isn’t hard.”

What is the secret of great writing? For David Foster Wallace, it was about fun. For Henry Miller, about discovery. Susan Sontag saw it asself-exploration. Many literary greats anchored it to their daily routines. And yet, the answer remains elusive and ever-changing.

I’ve read the story carefully and, Frances, I’m afraid the price for doing professional work is a good deal higher than you are prepared to pay at present. You’ve got to sell your heart, your strongest reactions, not the little minor things that only touch you lightly, the little experiences that you might tell at dinner. This is especially true when you begin to write, when you have not yet developed the tricks of interesting people on paper, when you have none of the technique which it takes time to learn. When, in short, you have only your emotions to sell.

This is the experience of all writers. It was necessary for Dickens to put into Oliver Twist the child’s passionate resentment at being abused and starved that had haunted his whole childhood. Ernest Hemingway’s first stories ‘In Our Time’ went right down to the bottom of all that he had ever felt and known. In ‘This Side of Paradise’ I wrote about a love affair that was still bleeding as fresh as the skin wound on a haemophile.

The amateur, seeing how the professional having learned all that he’ll ever learn about writing can take a trivial thing such as the most superficial reactions of three uncharacterized girls and make it witty and charming — the amateur thinks he or she can do the same. But the amateur can only realize his ability to transfer his emotions to another person by some such desperate and radical expedient as tearing your first tragic love story out of your heart and putting it on pages for people to see.

That, anyhow, is the price of admission. Whether you are prepared to pay it or, whether it coincides or conflicts with your attitude on what is ‘nice’ is something for you to decide. But literature, even light literature, will accept nothing less from the neophyte. It is one of those professions that wants the ‘works.’ You wouldn’t be interested in a soldier who was only a little brave.

In the light of this, it doesn’t seem worth while to analyze why this story isn’t saleable but I am too fond of you to kid you along about it, as one tends to do at my age. If you ever decide to tell your stories, no one would be more interested than,

P.S. I might say that the writing is smooth and agreeable and some of the pages very apt and charming. You have talent — which is the equivalent of a soldier having the right physical qualifications for entering West Point.

Two years prior, in another letter to his fifteen-year-old daughter Scottie upon her enrollment in high school, Fitzgerald offered more wisdom on the promise and perils of writing:

Don’t be a bit discouraged about your story not being tops. At the same time, I am not going to encourage you about it, because, after all, if you want to get into the big time, you have to have your own fences to jump and learn from experience. Nobody ever became a writer just by wanting to be one. If you have anything to say, anything you feel nobody has ever said before, you have got to feel it so desperately that you will find some way to say it that nobody has ever found before, so that the thing you have to say and the way of saying it blend as one matter—as indissolubly as if they were conceived together.

Let me preach again for one moment: I mean that what you have felt and thought will by itself invent a new style so that when people talk about style they are always a little astonished at the newness of it, because they think that is only style that they are talking about, when what they are talking about is the attempt to express a new idea with such force that it will have the originality of the thought. It is an awfully lonesome business, and as you know, I never wanted you to go into it, but if you are going into it at all I want you to go into it knowing the sort of things that took me years to learn.

Nothing any good isn’t hard, and you know you have never been brought up soft, or are you quitting on me suddenly? Darling, you know I love you, and I expect you to live up absolutely to what I laid out for you in the beginning.